More than 15,000 ASHA workers from across the state participated in the rally starting from City Railway Station up to Freedom Park. Once again the Bangalore’s majestic Fly over got the make-over of a pink river. The freedom park was full and ASHA workers heard the speeches sitting on the street outside. 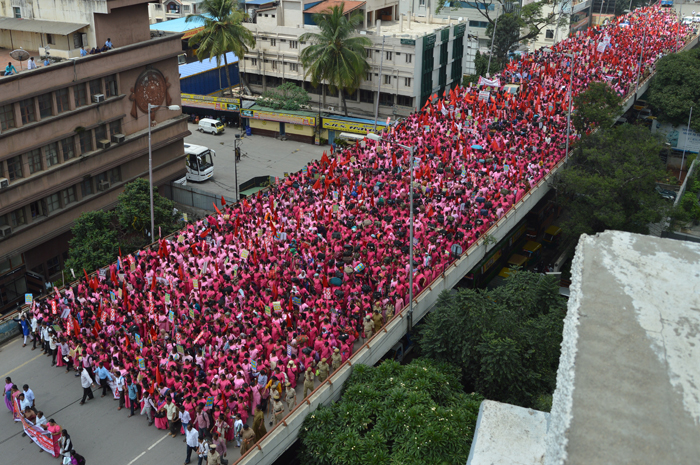 The programme began by condemning the heinous killing of the renowned Journalist and social activist Smt.Gowri Lankesh. The Karnataka State ASHA workers Union passed a resolution condemning the attack and demanded that the state government bring to book the culprits and punish them.

Dr.Shalini Rajnish (Principal Secretary) greeted the ASHA workers and said the leaders of the ASHA union met the health minister and the authorities. She said “We understand that ASHA Soft has caused a lot of problem. ASHA’s are entitled to get as much as Rs 13,000/-but due to technical and administrative difficulties many of you are not even getting 1,500/-. Therefore a data entry operator at the taluq level will be appointed. Every ASHA worker will get Rs 5000/- per month which includes the commitment from both state and central governement.  I will send proposal for welfare fund scheme for ASHA workers to the finance ministry.”

Smt.Roopa Hasan said “ I am with you for the last 9 years in protest. Last December more than 20000 people joined the movement and only 1,000/- was increased. I demand our government to increase the scale to 6,000/- and nothing lesser than that. Appointing a data operator at the taluq level will not solve the problem, our state government must solve the problem by withdrawing the ASHA Soft Scheme. The Health minister Sri.Ramesh Kumar must come here to the venue of protest and address the ASHA workers. While the government declares that Rs 18,000/- should be the minimum scale for all workers, here is a situation where the government is bargaining with the ASHA workers for Rs 6,000/- which is 1/3rd of the recommended amount. The government must come out with a positive note and meet the demands of the ASHA workers who are doing commendable selfless health care work among the rural and urban poor. Let the protest continue till the demands are met”. 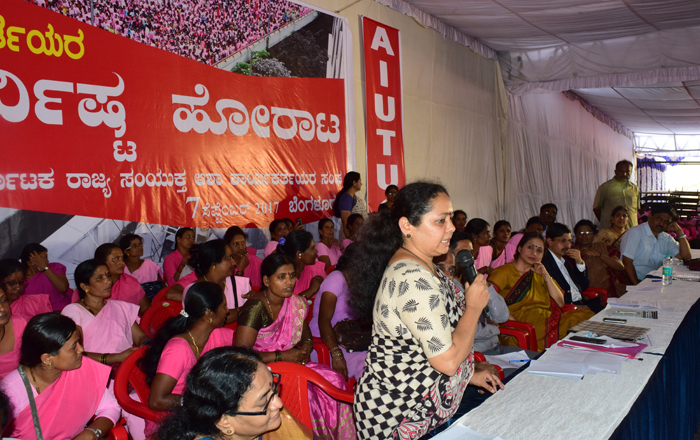 Dr.Nataraj (Director of Health and Family welfare Department) said that the department congratulates and appreciates your committed work of ASHA workers. We will propose to the government to increase the scale to Rs 6000/- in the next budget.

The ASHA workers were not convinced with the proposal. They demanded that the Health minister must come to the venue.

Smt.Hemalatha Mahishi (Senior Advocate), began her talk by condemning the attack on Gowri lankesh and said “ Killing an individual will only inspire fearless battles. It cannot instill fear. Ideas cannot be killed. I join you the ASHA workers in your demand for a fixed and regular monthly scale of Rs.6000/-, it’s a just demand and your voice must be heard. If there is money for Indira Canteen, why is there no budget for ASHA workers? If ASHA soft is a problem in an IT capital, silicon city then it is a shame to the government, the software scheme must be scraped immediately. I join your voice of protest and I join you in your demand for basic subsistence because it is also your constitutional right”.

Smt.K.Uma (State Committee member of SUCI(C)) extended revolutionary greetings to ASHA workers. She said “Despite 70 years of Indian independence, the condition of the poor in the country is pathetic. The strength of the country is decided by the importance that government gives to its health and education. The ASHA workers are protecting the health of the rural and urban poor, but the governments are not taking care of you. The authorities are here to bargain your scale. 58% of the country’s wealth is in the hands of 1% rich. Rs 35,000 lakh crores tax exemption is given to the rich but the government comes here to bargain your scale, they are not ready to give you Rs 6000/-. It’s a shameful situation. We from SUCI(C) uphold the spirit of struggle and will stand by you in your fight for your rights. The spirit of fight should be kept alive, a hundred years ago in the Soviet Union people’s revolution was accomplished by the workers, farmers and the downtrodden people. A socialist system established equal status to women, we will continue this fight towards a socialist system. Your demand of monthly scale of Rs 6000/- and scraping ASHA soft is just and the SUCI(C) extends its full support to the movement.”

Com.K.Radhakrishna (All India Vice-President of AIUTUC) said “the condition of the ASHA workers is worsening every passing day. Your demands are just and you must continue the fight. The voice of dissent has been silenced just yesterday in the killing of Gowri Lankesh, I condemn the attack in the strongest of terms.  It is heartening that today thousand more voices of dissent have risen in the form of ASHA movement. Let the spirit of movement continue, both the state and central governments have been bringing many anti-worker policies, these policies have to be defeated and I wish that you succeed in your movement. The AIUTUC extends its complete support to the ASHA movement.”

Com.Aparna.B.R (State President, AIMSS) supported the fight of the ASHA workers. She said “it is always easy to employ and exploit women. Do not allow yourself to be exploited. The All India Mahila Samskritika Sanghatane extends whole-hearted support to the movement”.

The ASHA workers are continuing their indefinite sit-in demonstration at the Freedom Park till the Health Minister Mr.K.R.Ramesh Kumar meets the ASHA workers in person and meet their demands.

…. those who claim themselves to be national leaders, while drawing up plans they never reveal to the people that these plans have been designed in the interest of the capitalist class. …the entire planning is vile. Its sole motive is to further consolidate the entire capitalist system — how to extricate it from the crisis in which it is enmeshed. Whenever it plunges in a crisis, their concern is to find out ways and means to extricate it from that so as to prolong its existence.….